You often hear people saying “Language X1 has sum types” or “I wish language X had sum types”2, or “Sum types are cool”.

Much like fezzes and bow ties, sum types are indeed cool. 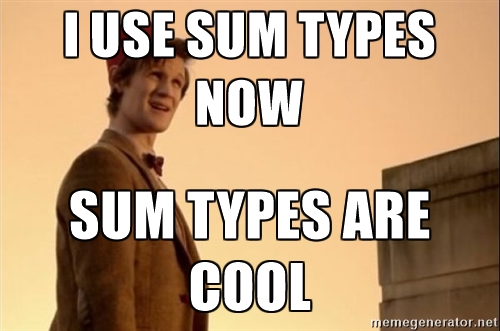 These days, I’ve also seen people asking about “Pi types”, because of this Rust RFC.

But what does “sum type” mean? And why is it called that? And what, in the name of sanity, is a Pi type?

Before I start, I’ll mention that while I will be covering some type theory to explain the names “sum” and “product”, you don’t need to understand these names to use these things! Far too often do people have trouble understanding relatively straightforward concepts in languages because they have confusing names with confusing mathematical backgrounds3.

So what’s a sum type? (the no-type-theory version)

In it’s essence, a sum type is basically an “or” type. Let’s first look at structs.

Foo is a bool AND a String. You need one of each to make one. This is an “and” type, or a “product” type (I’ll explain the name later).

So what would an “or” type be? It would be one where the value can be a bool OR a String. You can achieve this with C++ with a union:

However, this isn’t exactly right, since the value doesn’t store the information of which variant it is. You could store false and the reader wouldn’t know if you had stored an empty string or a false bool.

There’s a pattern called “tagged union” (or “discriminated union”) in C++ which bridges this gap.

Here, you manually set the tag when setting the value. C++ also has std::variant (or boost::variant) that encapsulates this pattern with a better API.

While I’m calling these “or” types here, the technical term for such types is “sum” types. Other languages have built-in sum types.

Rust has them and calls them “enums”. These are a more generalized version of the enums you see in other languages.

Swift is similar, and also calls them enums

You can fake these in Go using interfaces, as well. Typescript has built-in unions which can be typechecked without any special effort, but you need to add a tag (like in C++) to pattern match on them.

Of course, Haskell has them:

One of the very common things that languages with sum types do is express nullability as a sum type;

Generally, these languages have “pattern matching”, which is like a switch statement on steroids. It lets you match on and destructure all kinds of things, sum types being one of them. Usually, these are “exhaustive”, which means that you are forced to handle all possible cases. In Rust, if you remove that None branch, the program won’t compile. So you’re forced to deal with the none case, somehow.

In general sum types are a pretty neat and powerful tool. Languages with them built-in tend to make heavy use of them, almost as much as they use structs.

Why do we call it a sum type?

Let’s step back a bit and figure out what a type is.

It’s really a restriction on the values allowed. It can have things like methods and whatnot dangling off it, but that’s not so important here.

What’s a struct? A struct with two fields contains every possible combination of elements from the two sets.

The set of possible values of Foo is

A general struct would be a “product” of the types of each field, so something like

This is why structs are called “product types”6.

You can probably guess what comes next – Rust/Swift enums are “sum types”, because they are the sum of the two sets.

An example of this being a disjoint union is:

So, Rust/Swift enums are “sum types”.

You may often notice the terminology “algebraic datatypes” (ADT) being used, usually that’s just talking about sum and product types together – a language with ADTs will have both.

In fact, you can even have exponential types! The notation A^B in set theory does mean something, it’s the set of all possible mappings from \(B\) to \(A\). The number of elements is \({N_A}^{N_B}\). So basically, the type of a function (which is a mapping) is an “exponential” type. You can also view it as an iterated product type, a function from type B to A is really a struct like this:

given a value of the input b, the function will find the right field of my_func and return the mapping. Since a struct is a product type, this is

making it an exponential type.

You can even take derivatives of types! (h/t Sam Tobin-Hochstadt for pointing this out to me)

What, in the name of sanity, is a Pi type? 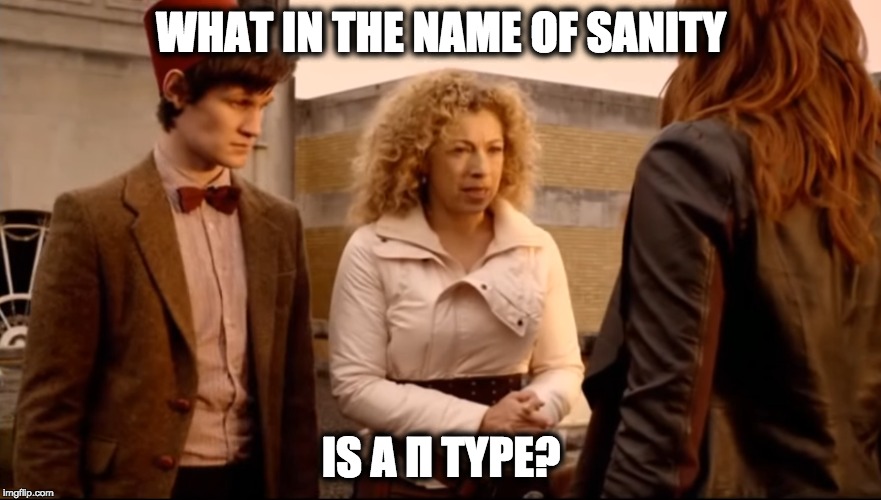 It’s essentially a form of dependent type. A dependent type is when your type can depend on a value. An example of this is integer generics, where you can do things like Array<bool, 5>, or template<unsigned int N, typename T> Array<T, N> ... (in C++).

Note that the type signature contains a type dependent on an integer, being generic over multiple different array lengths.

The name comes from how a constructor for these types would look:

What’s the type of make_array here? It’s a function which can accept any integer and return a different type in each case. You can view it as a set of functions, where each function corresponds to a different integer input. It’s basically:

Given an input, the function chooses the right child function here, and calls it.

This is a struct, or a product type! But it’s a product of an infinite number of types7.

We can look at it as

The usage of the \(\Pi\) symbol to denote an iterative product gives this the name “Pi type”.

There’s also a notion of a “sigma” type, which is basically

With the Pi type, we had “for all N we can construct an array”, with the sigma type we have “there exists some N for which we can construct this array”. As you can expect, this type can be expressed with a possibly-infinite enum, and instances of this type are basically instances of Array<bool, N> for some specific N where the N is only known at runtime. (much like how regular sum types are instances of one amongst multiple types, where the exact type is only known at runtime). Vec<bool> is conceptually similar to the sigma type Array<bool, ?>, as is &[bool].

Types are sets, and we can do set-theory things on them to make cooler types.

Let’s try to avoid using confusing terminology, however. If Rust does get “pi types”, let’s just call them “dependent types” or “const generics” :)

Thanks to Zaki, Avi Weinstock, Corey Richardson, and Peter Atashian for reviewing drafts of this post.