Back in March I was particularly interested in Zero-Knowledge Proofs. At the time, I wrote a long blog post introducing them and explaining how the ZKP for generic execution works.

I was really enjoying learning about them, so I decided to do a presentation on them in my crypto course. Sadly there wasn’t going to be time for explaining the structure of the proof for general execution, but I could present something more fun: Sudoku.

Sudoku solutions can be proven via ZKP. That is to say, if Peggy has a solution to Victor’s Sudoku problem, she can prove that she has a valid solution without ever revealing any information about her solution to Victor (aside from the fact that it is valid).

To make the ZKP easier to explain, I wrote an interactive version of it.

I planned to write about it then, but completely forgot till now. Oops.

I’m first going to explain how the ZKP is carried out before I explain how the interactive verifier works. If you aren’t familiar with ZKPs, you might want to read my previous post on the subject up to and including the part about proving graph colorings.

Victor has a Sudoku problem: 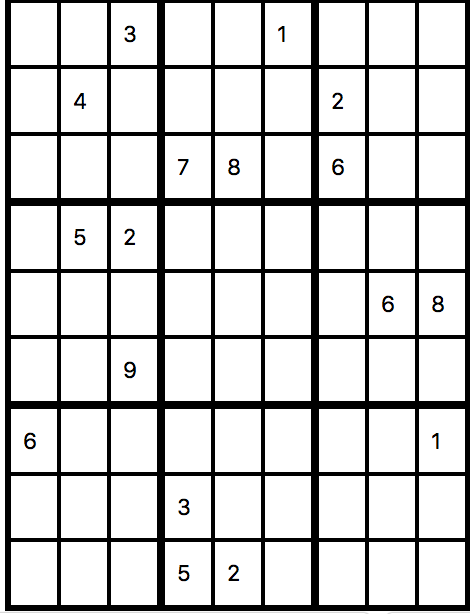 Peggy has a solution: 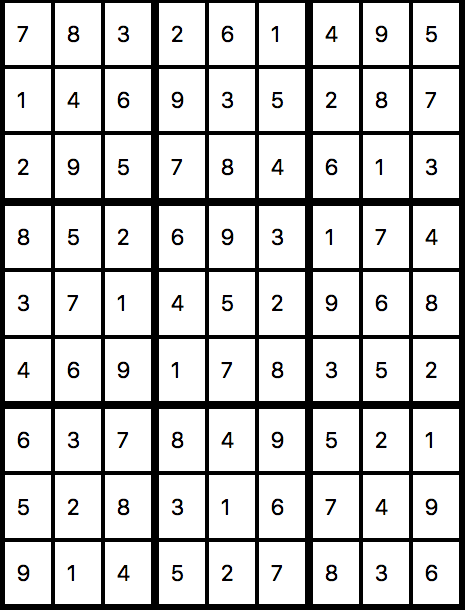 In order to not leak information about her solution, Peggy permutes it: 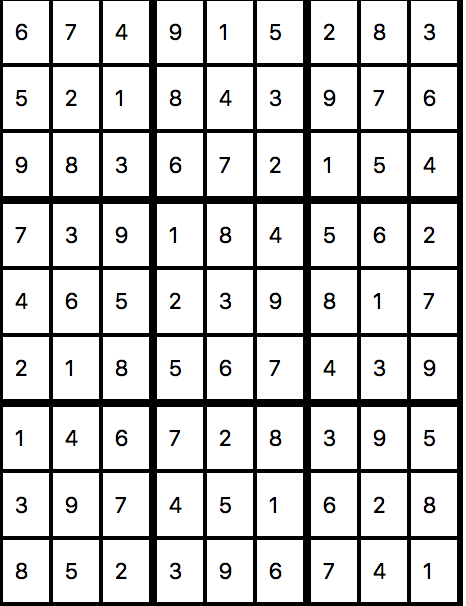 Basically, there is a 1-1 mapping between the old digits and the new ones. In this specific permutation, all 3s are replaced by 4s, all 1s by 5s, etc.

She now commits to this permutation by committing to every individual cell. A random nonce is obtained for each cell, and the contents of that cell are hashed along with the nonce. This is the same commitment procedure used in the graph coloring ZKP.

These commitments are now sent over to Victor.

Victor ponders for a bit, and demands that Peggy reveal the third row of the sudoku square. 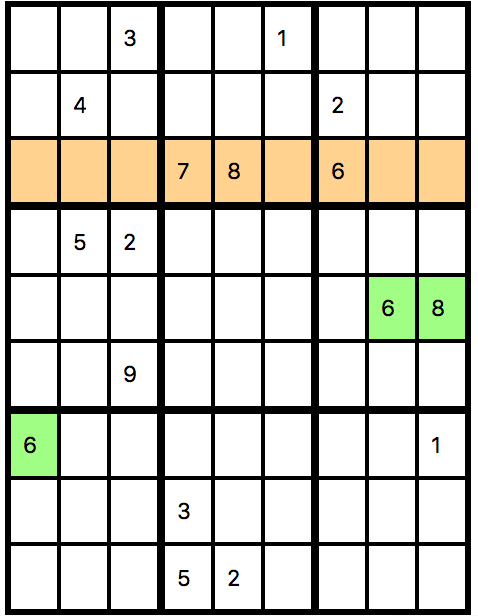 (Note that this is the non-permuted problem statement)

This row is marked in orange. There are some additional elements marked in green, which I shall get to shortly.

Peggy reveals the permuted values for this row: 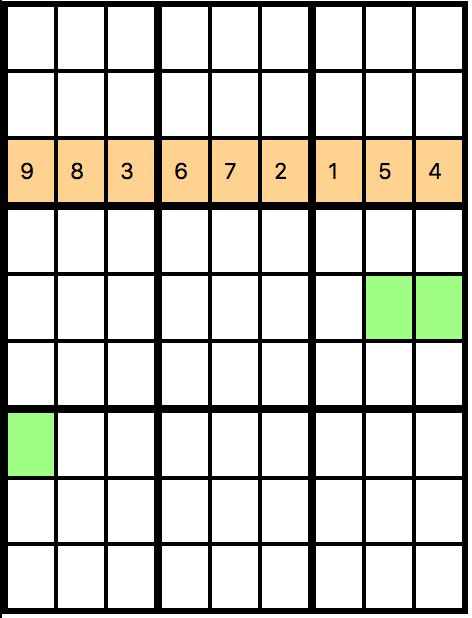 Victor can now verify that all digits 1-9 appear within this permuted row, and that they match the commitments. This means that they appear in the original solution too (since permutation doesn’t change this fact), and, at least for this row, the solution is correct. If Peggy didn’t have a solution, there was a chance she’d be caught in this round if Victor had asked for the right set of 9 squares to be revealed.

The procedure can be repeated (with a new permutation each time) to minimize this chance, with Victor asking to reveal a row, column, or 3x3 subsquare each time, until he is certain that Peggy has a solution.

But wait! This only works towards proving that Peggy has a valid Sudoku solution, not that this is the solution to Victor’s specific problem. Victor only verified that each row/column/subsquare had no duplicates, a property which is true for all sudoku solutions!

Peggy reveals the permuted values for both the green and orange squares each time: 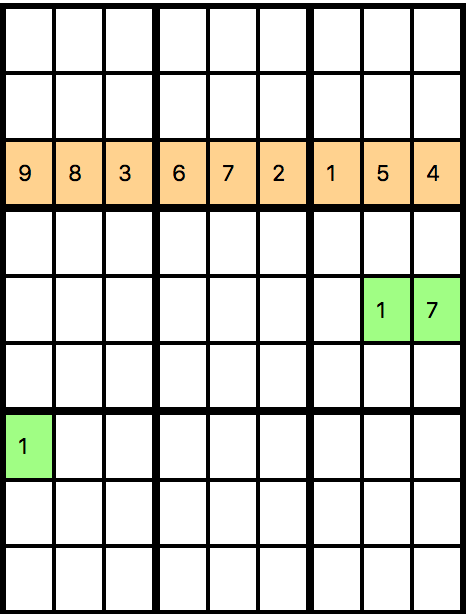 This lets Victor ensure that Peggy has a solution to his sudoku problem. The fact that two given squares must share the same digit is invariant under permutations, so this can be safely verified. In fact, a sudoku problem is really just a problem saying “Fill these 81 squares with 9 symbols such that there are no duplicates in any row/column/subsquare, and these three squares have the same symbol in them, and these five squares have the same symbol in them, and …”. So that’s all we verify: There should be no duplicates, and the digits in certain sets of squares should be the same.

We cannot reveal anything more than the green squares, since that would reveal additional information about the permutation and thus the solution.

Edit: This actually still isn’t enough, which was pointed out to me by “dooglius” here. Basically, if the sudoku problem has two digits which only appear once each, there is nothing that can stop Peggy from coming up with a solution where these two digits have been changed to something else (since they’ll never be in a green square). Fixing this is easy, we allow Victor to ask Peggy to reveal just the permuted values of the presets (without simultaneously revealing a row/column/subsquare). Victor can then verify that the preset-permutation mapping is consistent (all presets of the same value map to the same permutation) and 1-1.

This check actually obviates the need of the green squares entirely. As long as there is a chance that Victor will ask for the presets to be revealed instead of a row/column/subsquare, Peggy cannot try to trick Victor with the solution of a different sudoku problem without the risk of getting caught when Victor asks for the presets to be revealed. However, the green squares leak no information, so there’s no problem in keeping them as a part of the ZKP as a way to reduce the chances of Peggy duping Victor.

Visit the interactive verifier. There’s a sudoku square at the top which you can fill with a problem, and you can fill the solution in on the first square on the Prover side – fill this in and click Start. Since I know nobody’s going to actually do that, there’s a “Fill with known problem/solution” that does this for you.

Once you’ve initiated the process, the ball is in the Prover’s court. The Prover must first permute the solution by clicking the Permute button. You can edit the permutation if you like (to introduce a flaw), or manually do this after clicking the button.

The ball is now in the Verifier’s court. As you can see, there’s a set of hashes on the Verifier’s side. The Verifier only knows the problem statement and whatever is visible on their side of the screen, and nothing more.

You, acting on behalf of the Verifier, can now select a row/column/subsquare/preset using the dropdown and text box on the Verifier. As you select, the orange/green squares that are going to be revealed will be shown. When satisfied with your choice, click “Reveal”, and the Prover will populate your squares with the permuted values and nonces. “Verify” will verify that:

Once you click verify, it will show the probability of correctness (this isn’t an exact value, it’s calculated using an approximate formula that doesn’t depend on the problem statement), and the ball moves back into Peggy’s court, who can permute her solution again and continue. The probability slowly increases each round.

Doing this manually till it reaches 99% is boring, so there’s a button at the top (“Run automatically”) which can be clicked to run it for a given number of rounds, at any stage in the process once started. If you tamper with one of the values in the permuted solution, and run it for ~20 runs, it usually gets caught.